One-Pedal Driving - How Does It Work? 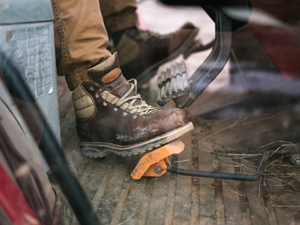 If you’re only now hearing about one-pedal driving, there’s a good reason for it: Most people use two or three pedals! However, one-pedal driving is making believers of many drivers who try it. It has its benefits, and in cars equipped with this feature, any journey can be safer and easier to drive.

One-pedal driving is primarily available on all-electric vehicles, even though PHEVs and hybrids also have regenerative braking capabilities.

With this type of driving, there isn’t the constant switching back and forth between pedals to accelerate and decelerate, letting drivers get the most out of every charge.

What Is One-Pedal Driving?

One-pedal driving is just what it sounds like: using only the accelerator pedal to speed up, slow down, and stop under normal driving conditions.

According to Chevrolet, one-pedal driving in an electric vehicle minimizes the expenditure of energy from the vehicle’s battery, helping you increase your range and get more out of a single charge. In cases of an emergency or when you need to make a sudden stop, you should still use the car’s brake pedal.

Drivers can turn one-pedal driving on and off, usually by pushing the OPD button in an electric car. According to Kelley Blue Book, one-pedal driving is safe, but it does take some practice to get used to it. It's recommended that you first practice driving it in an empty parking lot or similar area.

This feature allows drivers to plan ahead when they want to slow down or stop, which makes driving safer, as there’s less chance of being forced to throw on the brakes at the last minute. Drivers can always use the brake pedal, even when in OPD mode.

With that being said, there are three conditions under which it isn’t safe to use the one-pedal driving feature:

The basic operation of the feature includes pushing down on the pedal to accelerate and lifting the foot off the pedal to decelerate. When you remove your foot from the pedal, the car will quickly slow down and come to a stop.

Using the OPD system can lengthen the life of a car’s brakes since they aren’t being used nearly as often.

What Is Regenerative Braking?

In electric and hybrid vehicles, regenerative braking is a feature that, like OPD, captures energy otherwise lost during braking to recharge the vehicle’s battery. When you press the brake pedal in a traditional automobile, the brakes create friction, and most of the vehicle’s energy dissipates as heat.

Regenerative braking recovers some of that energy because the motor drives the wheels as a car speeds up, but the wheels drive the motor while a car slows down. That way, a car's battery lasts longer, improving efficiency and providing greater range.

Is One-Pedal Driving Really Worth It?

Kelley Blue Book characterizes one-pedal driving as a cool feature that can change your driving experience and claims that many drivers will be hooked once they get used to the action. You’ll have to make up your own mind about whether that’s true.

If it makes you crazy in stop-and-go traffic to constantly switch between pedals, you may want to try this safe alternative when you have the opportunity.