The Henry Ford: Classic Cars and a Whole Lot More 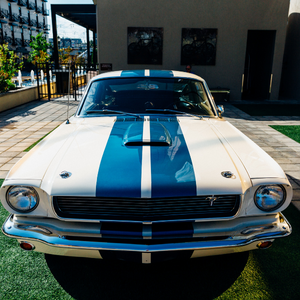 If you're expecting to see just a car museum--oh boy, is there more at The Henry Ford! The museum also preserves important pieces of American history, and new, exciting exhibits are on constant rotation. What are the myriad incredible sights you can see at The Henry Ford?

Cruise through a history of the automobile with over 100 cars and 20 touchscreens with all of the information you could want.

The exhibit explores the ever-evolving relationship Americans have with cars and how technology has advanced. But the exhibit isn't just about cars. You'll also see vintage signs for fast food restaurants, service stations from the early days of motoring, and other memorabilia.

The monstrous Ford Mark IV is the ultimate evolution of the original GT40. Piloted by Dan Gurney and A.J. Foyt, this is the beast that won the 24 Hours of Le Mans--the first and only American car to accomplish this feat. And thanks to The Henry Ford, you can see this 200 mph race car up close.

It was supposed to be the "house of the future," but it never became anything more than a curiosity. The legendary R. Buckminster Fuller designed the house to be built out of aluminum-copper alloys to be strong and light--and look like a spaceship.

Unfortunately, some engineering challenges led to Fuller abandoning the project, but it's still fascinating to see what could have been.

This locomotive results from a meticulous restoration with many specially fabricated parts. It is a work of art. The original locomotive sat untouched for 80 years and was like a time capsule--but it was also in terrible shape. After years of work, the locomotive is now able to wow visitors.

Yes, the bus Rosa Parks sat on in 1955--one of the catalysts for the civil rights movement--is at this museum! After rusting in a field for much of its life, the bus has been painstakingly restored to its original condition.

Heroes of the Sky

While this section is dedicated to airplanes of every era and is an incredible collection of vintage aircraft, the centerpiece is, without a doubt, the exact recreation of the first airplane--the Wright Flyer.

There are also events and interactive exhibits that will only be around for a limited time! Young children will enjoy the Day Out with Thomas the Tank Engine featuring a real, working train that looks just like Thomas.

Kids will also enjoy Henry's Assembly Line, where they'll work together to make a small, wooden, scale Model T according to Henry Ford's assembly line process. If that's not enough for you, there's also an opportunity to build a real, honest to goodness, working Ford Model T.

The Henry Ford houses an incredible display of history. From a Menlo Park recreation to the bus Rosa Parks famously sat on to vintage Ford race cars, there's a display or exhibit for you.