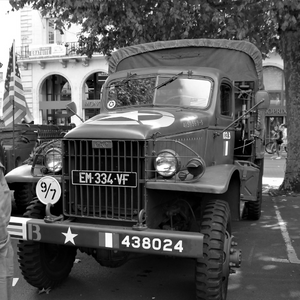 Yes, some of the vehicles you pass on the street were originally intended to carry troops, not groceries. You probably suspected a few of these, while others might take you by surprise.

You might have heard someone say, "the Jeep Wrangler was originally a military vehicle!" Actually, it wasn't. The Wrangler was released in 1986 when American Motors Corporation still owned Jeep, and it was designed to evoke the feeling of the original.

Willys-Overland/Ford made military Jeeps--there are zero shared parts. However, the Wrangler's direct predecessor, the Civilian Jeep (CJ), can directly draw its lineage to the first military Jeeps or General Purpose vehicles (GPs).

The first CJ's were barely changed from the original military spec and were slowly modified over generations to be more comfortable and usable on the street. If you've ever driven an early CJ--or a late CJ, for that matter--it may be surprising that it's somehow the more refined version.

In 1979, the military wanted a new off-road capable vehicle, so they drafted their required specs for the High Mobility Multipurpose Wheeled Vehicle, which was a mouthful of words, and its initialism was no better. We dare you to pronounce "HMMWV." HUMVEE was the easiest way to say it.

Thanks to its fully independent suspension and massive (self-inflating) tires, it had 16 ounces of ground clearance, making it an off-road monster. If you want to buy one of these beasts, thank Arnold Schwarzenegger. He asked AM General to make a civilian version and bought the first two.

You probably know it better as the G-Wagen, or just the G series, but the original name is Geländewagen. Before it became the trendy vehicle for rich soccer moms and celebrities, it was known as one of the most capable off-road vehicles ever created.

Development started in the early 70s, with the final version becoming available in 1979, though test models thwarted the Arctic Circle and the Sahara Desert as early as 1974.

After decades of pleading, Mercedes finally made the Geländewagen, renamed the "G Class," available in the United States in 2002. While it mostly does the job of a tall station wagon these days, off-road enthusiasts love its ground clearance and ability to lock the front, center, or rear differentials.

Yes, the "Rambo Lambo" was originally intended to be a military vehicle. Lamborghini hoped it would become the US Military's new off-roader in 1977 when it was rear-engined and called the Cheetah.

You've already read about the HUMVEE, so you know how well this went. It's not all bad news, though, because Lamborghini was determined to build the vehicle, and we ended up with the insane LM002.

The Land Rover Defender--the vehicle of choice for people who like trendy, vintage SUVs--started with the British looking at a Jeep and saying, "Pssh, we can do that, too." They did indeed--and built a famously rugged, terrain conquering monster.

Its reputation for handling insane topography is fully warranted. The vehicle was so popular that even though there is now a new, refined and comfortable Defender, the original design is still being produced in developing countries.

Sometimes a car or truck you pass on the road looks like any other vehicle. Then, it turns out that it started life in the military.