How Much Tint Is Too Much Tint? 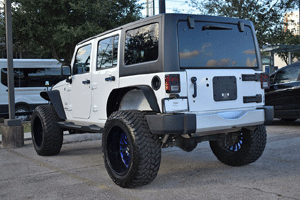 Don't expect a quick or easy answer to the question of tinting, because different states have different rules about how much tint they'll allow. Depending on where you live, you might be able to get nearly opaque windows, or you might not be able to so much as smudge your windows without getting a ticket.

The way to measure window tinting is by Visible Light Transmission (VLT). VLT gives a percentage to indicate how much light passes through, with 100% being the most light and 0% being the least. 100% is no tint, and 0% completely blocks light.

Why Tint Your Windows at All?

One of the biggest reasons people like window tinting is UV protection. The darker the tint, the more UV radiation gets blocked. This is a great way to keep the interior of a car from fading.

Tinted windows also protect the people inside from getting too much UV exposure. Tinting even gives occupants more privacy. Plus, it can look really cool.

Which Windows Can Be Tinted?

No state allows for completely tinted windshields, but all allow tinting on the top four inches. Other than that, the biggest restrictions are for the front side windows (for visibility reasons). All states allow some tinting of back passenger side windows and the rear window.

What's the Legal Status of Tinting?

Each state has its own tint laws. Since the strictest control is over the front side windows, we'll examine those first:

Three states do not allow tinting at any level for front side windows: Vermont, New Hampshire, and New Jersey.

States That Allow Some Tinting

The states that allow 70% VLT are Alaska, California, Iowa, Pennsylvania, New York, The District of Columbia, Delaware, and Rhode Island.

States That Allow the Darkest Tinting

If you want to have seriously dark front side windows at 30% or lower, you need to go to Florida, Washington, Texas, Oklahoma, New Mexico, West Virginia, Mississippi, South Carolina, Indiana, Arkansas, Missouri, Colorado, Montana, or Wyoming.

Michigan is an interesting case because they allow any level of tint for windshields and front side windows as long as it's restricted to the top four inches.

Because safety is less of an issue with rear windows, states have much more lax rules about how tinted they can be. Here are some oddities:

Iowa, California, and Delaware have relatively strict rules about front side windows with a tint restriction of 70%. As for the backside windows and rear window? Tint as much as you want!

Vermont is particularly odd because they allow zero tinting on the front side windows, but if you want to tint your backside windows? You could make them opaque if you wanted.

Want to go where you can tint to the max? Maine and Missouri have the fewest restrictions. You can go with a dark 35% VLT on the front side windows and any tint you like on the backside windows and rear window.

Want to make your car feel like you're driving a cargo van at night? You can do it in Maine and Missouri.

As with most things, there are exceptions to the rules. Some people need tinting because of illnesses that cause sensitivity to light, and the state will allow them to get darker tinting than what would normally be legal. Those drivers, however, must carry a doctor's note with them at all times in case they get pulled over.

Tinting can look cool and is surprisingly practical. But states have different laws, so look up whether it's legal first if you want to add some tint.