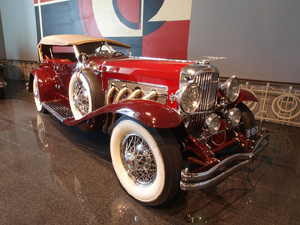 The brothers decided to devote their attention to passenger cars, creating "Duesenberg Automobile and Motors Company, Inc." Their first was the Model A, completely unrelated to the Ford of the same name.

While it was expensive at $6,500 in 1921, it was also terrifically advanced for the time, featuring a straight-eight engine with dual overhead camshafts and four valves per cylinder—specs that are still not standard even today.

The cars also had hydraulic brakes when mechanical brakes were the norm. About 650 were built in total.

In 1925, Cord Automobiles bought the failing Duesenberg and challenged the brothers with creating the greatest luxury car possible. The Model X came out 1926, featuring an unheard-of 100 horsepower.

These cars sold in even fewer numbers than the already poorly-selling Model A, with only 13 built. It was the next car Duesenberg produced, however, that would be the one to establish their place in history as builders of the finest automobiles ever crafted.

The Duesenberg Model J went on sale in 1928. It featured fine, custom coachwork costing anywhere from $13,000 to nearly $20,000 for a finished car. The model J boasted unparalleled performance from its Lycoming-built straight eight, which produced a staggering 265 horsepower. Only 445 were built.

The Candle That Burns Twice as Bright…

As the Great Depression began to take a toll on the company, the brothers had more power and opulence in mind. Following the J, the brothers unveiled the supercharged version of the J, referred to as the SJ.

Thanks to forced induction, the engine produced an unheard-of 320 horsepower. Unfortunately, an astronomical price tag and the effects of the Depression meant that they built only 36.

In 1937 the company ended when Cord went bankrupt. There were two cars built before the very end, though.

In 2018, one of only two 1935 Duesenberg SSJs sold at auction for $22 million. This amount is the highest price ever paid for an American car and represents the pinnacle of Duesenberg's small output.

The two cars were built for celebrities Clark Gable and Gary Cooper (Cooper's car being the one that fetched $22 million). The stars used to race each other in the cars on the street. Built on shorter 125-inch wheelbases and putting out 400 horsepower, these cars could exceed 150 miles per hour.

With technology and power that wouldn't be matched for decades, Duesenbergs represented the world's greatest cost-is-no-object cars. Prices dropped as the cars were forgotten, with Duesenbergs selling in the 1950s for hundreds of dollars.

As collectors found and restored these elegant beasts, prices climbed, and so did prestige. Thankfully, they were just too much of a doozy to forget.

Duesenbergs were the true standard of the world. The company may have disappeared, but their legacy lives for a reason.