A Brief History of Monster Trucks 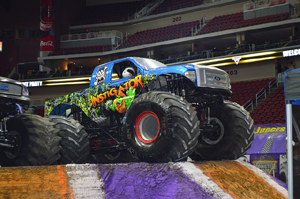 Bigfoot. Grave Digger. Snakebite. These might not be names you'd want for your kids, but they represent some of the most famous monster trucks you'll find in the arena. In this post, we'll take a look at the history of monster trucks, showing how these events shifted from a niche market to a family-friendly night of entertainment.

During the late 1970s, heavily modified pickup trucks were commonly used in the sports of mud bogging and truck pulling. Soon enough, a competition emerged to see who could build the biggest truck, accomplished through lift kits and other aftermarket modifications. Among these early competitors were Bob Chandler's Bigfoot and Jeff Dane's King Kong. At that point, though, the truck tires didn't exceed 48 inches in diameter.

It wasn't until 1981 that Bob Chandler filmed his truck, Bigfoot, crushing cars for a promotional video. In 1982, Bigfoot was in the arena performing the same stunt—this time with 66-inch tires, making it the first "true" monster truck.

The 1980s saw many imitators of Bigfoot's impressive style and performance. Initially, drivers used monster trucks as exhibitions—the equivalent of a circus sideshow—at major motor events. But soon, these vehicles made the transition into a sport all their own and, in 1987, the U.S. Hot Rod Association (USHRA) created head-to-head competitions that blended monster truck racing and more car-crushing spectacles.

The meteoric rise in popularity also meant that someone or something needed to establish rules; so, in 1988, Bob Chandler helped form the Monster Truck Racing Association (MTRA). This organization would establish some basic safety guidelines and help advance the sport in the U.S. and Europe.

Monster Truck Competitions in the 1990s

By the 1990s, monster trucks had solidified their place alongside other popular motorsports. In addition to the usual racing and car-crushing, 1993 saw the inception of "freestyle" events designed to showcase each vehicle's unique features—not to mention the drivers' derring-do.

Meanwhile, the "Monster Jam" competition made monster trucks something of a household name, and the competition established further safety guidelines and competitive standards. This also led to the rise of "celebrity" trucks, carrying the tradition of Bigfoot forward with the likes of Grave Digger and Sudden Impact.

By the year 2000, these freestyle competitions became a major staple of monster truck competitions, and the USHRA began offering a freestyle championship.

Monster Trucks in the Twenty-First Century

Monster trucks have risen from the mud bogs of the 1970s to the arenas of today. After these vehicles were standardized in the 1980s and 90s, the monster truck competition became an appreciated sport of its own and is beloved by families across the United States.