The Roots of the Autobahn 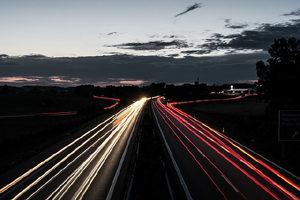 Do you feel the need for speed? If so, the Autobahn might be your dream come true. This iconic German highway is most famous for its lack of speed limits. How did the Autobahn come to be? Why are there no speed limits? In this post, we'll explore the history of the Autobahn and how it emerged as a cultural symbol.

The Autobahn has a checkered history. German roadways began as early as 1913, though these roads lacked the quality and connectivity of later construction projects. Planning for a highway system began in the mid-1920s during the Weimar Republic, but it was the Nazis who accelerated construction efforts after they rose to power in 1933.

Hitler saw the value in creating what would be known as the "Reichsautobahn," which would advance individual mobility. This would increase national growth and further the cause of National Socialism. The 1,300 miles of roadway were completed prior to halting construction in 1943.

During the Second World War, the Autobahn proved to be too steep and winding for practical use by the German military. Large sections were essentially abandoned until the war ended. Ironically, the roadway would give allied forces an advantage during Germany's defeat.

After the war, the road became known as the "Bundesautobahn," which translates to "Federal Highway." The war left the road in great need of repair. Many sections had never been completed, and other sections had been decimated by allied bombs.

Repair efforts lasted from the end of the war to 1953 when the West German government focused on expansion efforts. In the two decades from 1964 to 1984, the road expanded from 1,865 miles to 4,970 miles.

After the Berlin Wall fell, the reunification of Germany sparked another period of expansion. By 1990, the Autobahn expanded to 6,835 miles‐though East Germany's section was in need of repair and service.

By 2004, the Autobahn became the third-largest superhighway system in the entire world, with more than 8,000 miles of roadway.

Why Is There No Speed Limit?

Technically, there are sections of the Autobahn that have posted speed limits of 80-130 kph (50-81 mph).

Other sections have an "advisory" speed limit of 130 kph (81 mph). Adhering to this speed limit isn't required, though if you're in an accident, your speed may increase your liability.

The Autobahn is specifically designed for high speed. The concrete surface is resistant to freezing. Beneath the asphalt is a heavy roadbed, and together the layers are roughly 30 inches deep. The government suggests a maximum speed of 130 kph (80 mph hour); still, they let drivers go as fast as they want.

Because the road is famous for high-speed driving, it is regularly inspected and maintained.

Once the brainchild of Adolf Hitler, the Autobahn has expanded to become one of the world's most iconic highway systems. The road conditions and lack of official speed limits has made the Autobahn synonymous with high-speed driving.