Why Hertz Had to File Bankruptcy 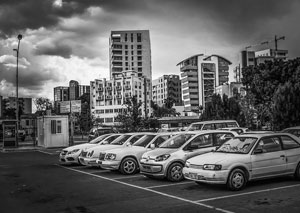 Hertz may not be the biggest name in the rental car game, but they are certainly an influential rental car company. With more than 500,000 cars in their fleet and locations at most airports on the planet, Hertz was one of the most well-known companies in the industry. How did a century-old company find itself in bankruptcy court?

Essentially overnight, Hertz went from being a successful multi-million-dollar rental car company to a business that was barely scraping by. With lockdowns spreading around the world and jobs disappearing, Hertz started their descent.

The Fall of an Empire

On May 22, 2020, Hertz filed for bankruptcy protection after being unable to pay $400 million to lenders. The lost income from rental cars and selling retired cars left them with little cash to weather the storm. The coffers were empty and it was time to make a drastic decision: To declare bankruptcy.

Hertz, though, seems to be the only rental car company that needed to file for bankruptcy. Enterprise and Avis, its top two competitors, definitely suffered a decline in rentals, but they managed to survive. Their survival is likely because the companies had more financial cushioning than Hertz did. While Hertz was spending money in other ways, Enterprise and Avis avoided risk with their budgets and were better prepared when the pandemic hit.

Instead of building a cushion, Hertz has been spending their money enhancing certain aspects of its business. It's a decision that would've otherwise likely paid off, but with a sudden pandemic, it ended up being the very thing that made the company declare bankruptcy. They put too much money into their fleet and other upgrades, which left them without room in the budget to cover operating expenses once revenue disappeared.

Is There a Future for Hertz?

Bankruptcy is not necessarily the end of a business, although it usually is a sign that the end is near. Hertz is selling off 180,000 of its 500,000-car fleet to raise funds to pay off approximately $650 million to lenders. Their hope is that they can manage to secure legal protection against many of their creditors and raise enough funds to pay off the rest.

It's possible that they will emerge from the pandemic and continue to rent cars to travelers. Other market conditions were already harming their business, however, especially ride-sharing. The rise of ride-sharing has already cut into Hertz's business by providing an easy way to get to hotels from an airport.

Will Hertz keep kicking? That remains to be seen. If Americans emerge from the COVID-19 pandemic with the urge to travel, there may be hope. If Americans are cautious and wary of traveling for too long, though, Hertz might be down for the count.