The Rise of Chinese Automakers 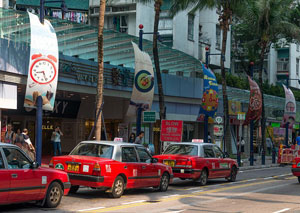 In the United States, we don't hear about Chinese automakers all that often. Did you know, however, that the automotive industry in China produces more vehicles than any other country? There are several Chinese automakers that fill the streets with reliable vehicles.

Today, we're going to discuss the “Big Four” Chinese automakers. We'll give relevant information about each one, along with their plans to start selling vehicles in the United States.

Short for Shanghai Automotive Industry Corporation, SAIC Motor is state-owned and is a Fortune Global 100 company. In 2014, SAIC Motor had the honor of producing more cars than any other automaker in the world, which gives us a hint about their production capabilities.

SAIC Motor has partnered with Volkswagen and General Motors in the past, but their extensive network of plants makes producing their vehicles an inside job. SAIC Motor owns the brands Roewe, MG Cars, and Maxus. Additionally, other products are sold under the brand names Baojun, Buick, Chevrolet, and Wuling.

As another state-owned automaker, Dongfent has spent their 52-year history expanding their way into many aspects of the automotive industry. Their primary function is to manufacture a line of vehicles, but they also generate revenue by manufacturing parts and conducting joint ventures with other automakers.

Short for First Automobile Works, FAW is a state-owned automaker that produces cars and buses, along with light, medium, and heavy-duty trucks. Founded in 1859, FAW has the honor of being the first automaker in China and producing the first domestic vehicle, the Hong Qi, which it still manufactures today. FAW also produces Bestune, Junpei, Senia, Haima, and FAW-Baolong.

Chang'an Automobile Group Co., Ltd., is the final of the Big Four. You guessed it—it's another state-owned automaker that opened its doors in 1862, following right behind FAW. Chang'an manufactures and sells passenger cars under the name Chang'an and produces commercial vehicles under the brand name Chana. They are considered to be the second most popular car brand based on sales, selling 1.4 million Chang'an vehicles in 2016.

When Will We See Chinese Cars in the U.S.?

The current lack of Chinese cars stems from politics surrounding trade with China. Many Chinese automakers, such as Lynk & Co and Vantas, however, are racing to get into the U.S. market. Most of their plans to enter the market include partnering up with existing American brands. Will these plans come to fruition or will the plans fail to become reality?

Only time will tell whether Chinese cars start making an entrance in the U.S. market. At present, it doesn't seem as though the Big Four are in a race to sell cars in the U.S. That race currently seems to be reserved for the smaller automakers that are looking to expand their businesses.