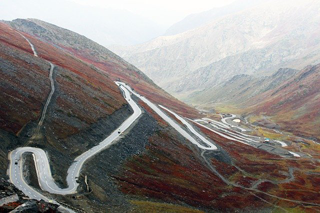 "Turning radius" is a specification that describes how much space your car needs to be able to turn around and go in the other direction. The turning radius is determined by the space needed to turn your wheel all the way in one direction from the straight-ahead position.

When Does Turning Radius Matter?

Turning radius might not seem like the most important statistic for your vehicle, but it can make a crucial difference when you're driving.

Everyone will have to make a U-turn at some point in their life—it can even come up any given week. A turning radius will determine if you can easily make a U-turn or if you need to do a 3-point turn. The difference between these turns is nothing major if you're on an empty road, but if you're on a busy road, it can make the difference between a smooth change of direction and an adrenaline-pumping near-accident.

A shorter turning radius generally translates to a more pleasant driving experience (unless you're used to planning for three-point turns instead of U-turns).

Doing U-turns on busy streets is typically related to city living. As such, this metric is typically more important for city dwellers. That's why cars with excellent turning radii typically make lists of the best cars for city life. In contrast, people living in rural areas might not care about a car's turning radius whatsoever.

Another aspect of driving that involves a turning radius is parking. Quite simply, a car with a tight steering radius will require fewer rotations of the wheel, making parking and maneuvering in close quarters much easier.

What is an Ideal Turning Radius?

Generally speaking, the smaller the car, the better the turning radius will be. If you imagine a MINI Cooper and Toyota Tacoma both doing the same U-Turn, which one would be easier? Blind spots aside, the MINI Cooper would be much easier.

Should You Prioritize A Turning Radius?

People who live in cities with narrow roads will likely benefit from cars with a short turning radius, while rural drivers probably won't care at all. You'll have to think about your area and where you like to drive to determine whether this is an important feature to prioritize.