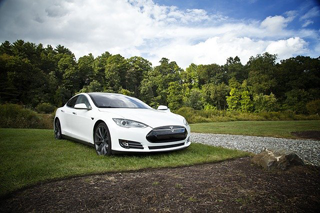 The first small-scale electric cars seemed to spring up in Hungary, the U.S., and the Netherlands all around the same time between 1828 and 1935. Robert Anderson is credited for having completed the first crude electric vehicle in 1832. It wasn't until the 1870s, however, that an electric car would become practical.

William Morrison from Iowa created what was essentially an electrified wagon in 1896, and it sparked national interest in the idea. Back then, people were trying to solve the issue of the horse droppings that littered the streets from horse-drawn carriages. An electric carriage seemed like a perfect solution.

In 1900, electric cars were becoming quite popular. Electric vehicles were easier to start and easier to drive than gas and steam-powered cars. They also didn't have any unpleasant emissions. By 1912, electric cars accounted for one-third of all vehicles on the road. Innovators and inventors were getting involved in the electric vehicle trend. Even Thomas Edison worked to develop a better battery for them.

The Fall of Early Electric Vehicles

For a few decades, it seemed like electric vehicles were the wave of the future. One very familiar name, however, can be credited for dealing a fatal blow to electric cars.

Ford mass-produced Model-T gas-powered cars that could be bought for $600 compared to the $3,000 required for an electric vehicle. The electric starter was invented in 1912 and introduced a much easier way to start internal combustion engines than the cranking method.

The final nail in the coffin of early electric vehicles was the further development of long roads connecting towns and cities. Suddenly, people wanted to drive much further distances than before. The lack of charging stations gave a distinct advantage to gas-powered cars, since building a gas station was much easier than building an electric charging station. The lack of a standardized charging adapter also didn't help the situation.

A Brief Resurgence in the 1970s

After Ford squashed early electric vehicles, decades passed, and gasoline vehicles became the standard. A gas shortage caused prices to soar in the 1970s, however, creating renewed interest in electric cars. It's also a timely coincidence that the electricity-powered Lunar rover propelled electric vehicles into the spotlight.

The most successful electric car of the 1970s ended up being CitiCar, made by Sebring-Vanguard. It was a compact car featuring a wedge-shaped front with an impressive range of 50-60 miles.

As gas prices normalized, interest in electric vehicles once again began to fade.

We now know that with the right technology and charging grid, electric vehicles are certainly viable. Tesla Motors has significantly accelerated the development of electric cars, continuing to forge a path that began nearly 200 years ago.