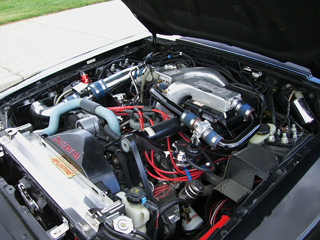 Debates about which engine size is better can be found on all corners of the Internet and in the greater auto enthusiast community. If you're new to the argument, big block engines and small block engines are different types of V8 pushrod engines. Auto enthusiasts like to discuss which size is superior, and neither side seems to be able to sway the other.

We're about to look at the differences between these two engine sizes and examine why some prefer one to the other. We'll go over various terms related to these engines and discuss the meaning of the different values.

The Significant Differences in Engine Sizes

Displacement is the term used to describe the overall volume in an engine's piston. It's often referred to in cubic inches, although you'll sometimes see it referred to as liters. A larger displacement value means that the piston can draw in more air and fuel. This often relates directly to power.

Displacement is the main difference between the two sizes, but it's not the only difference. The distance that a piston has to travel up and down is referred to as the stroke. Small block engines have a shorter stroke, while big block engines have longer strokes. A shorter stroke allows for quicker revving, while long strokes result in more torque.

What is the Functional Difference Between Big Block and Small Block Engines?

Up until now, we've been looking at the technical differences between the two types of V8 engines. What does it all mean?

Conversely, big-block engines are heavier but generate more raw power. They have higher torque ratings and are often seen in vehicles meant to haul something. Acceleration and handling are not the main concerns, so a big block engine helps create more torque. Big block engines also consume far more fuel.

While both block sizes are V8 engines, neither size can be ruled as the superior engine. They serve different purposes and, much like other specialized parts, you can't truly compare them on equal ground.