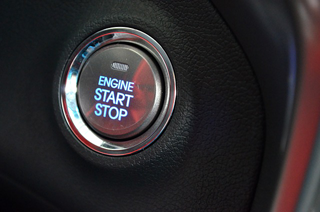 Keyless ignition for cars is nothing new. Although it has gained popularity in modern vehicle makes and models since about the early 2000s, the concept of a push start ignition actually dates back to 1911, when Charles Kettering of Dayton Engineering Laboratories Company modified his power switch from the electric cash register to work with car engines previously started by crank. The first car company to introduce this revolutionary technology was Cadillac, in 1912.

While this certainly simplified the act of starting a car (and made it much safer, as well), the technology was eventually supplanted by the key start we are familiar with today. When it was introduced in 1949 by Chrysler, it was considered a safety innovation, as it prevented children from accidentally starting a vehicle with the mere push of a button.

In 1998, Mercedes-Benz reintroduced the keyless ignition with their “Keyless Go” technology. With the growing popularity of keyless entry fobs, which emit a unique signal to open doors and start the car, the safety features remained while convenience was enhanced.

Today, this option is available on a wide range of cars, but that doesn't mean it's all wine and roses. It turns out push start ignition has its downsides. What's not to like? Here are a few potential drawbacks to the keyless ignition.

The Cost of a Key

True, keyless ignition requires no metal key to insert and turn, but you do need a fob to get in your car and start it. What happens when the smart key fob stops working or you lose it? Well, it costs a lot more to replace than your average key, that's for sure.

While having a locksmith make a new key for your car could come in at under a hundred bucks (especially if you have the foresight to make extra keys before you lose the original), a smart key fob could set you back up to $500, depending on your vehicle's make and model and the policies of your dealership.

The Curse of a Quiet Car

Modern cars, both electric and petroleum powered, are getting quieter and quieter. Without the need to turn a key, it's not all that unusual for drivers to simply forget to turn off their vehicles, and in some cases, put them in park.

According to the National Highway Traffic Safety Administration (NHTSA), more than two dozen people have died from carbon monoxide poisoning since 2006 because they left the engine running in an enclosed garage; many others have simply suffered illness or injury as a result. Others have been injured or caused accidents by exiting the vehicle without putting it in park or turning off the engine first. Most vehicles now alert the driver to this situation if the driver's door opens with the car still on, but it can still be a problem.

By and large, keyless ignition adds convenience for drivers, but losing smart keys can be a pricy affair, and unconsciously exiting a running vehicle can lead to accident, injury, and even death.