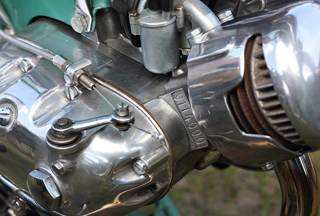 If you know a bit about what's under the hood of your car, chances are you know that your vehicle is propelled by a 4-stroke cycle. You may have even heard of a 2-stroke cycle, even if you're not entirely sure what it is. What's the difference between 2-stroke and 4-stroke engines? Why is the 4-stroke model standard in cars, and where can you find 2-stroke engines in use today? Here's what you should know.

Engines are complex machines, made up of hundreds of parts working together to make your car run. The entire kit-and-caboodle, however, is designed around combustion, which is where fuel is ignited, creating a small, contained explosion that serves as the impetus for propulsion.

A 4-stroke cycle is so named because it consists of four strokes: intake, compression, combustion, and exhaust. It starts when fuel and air are drawn into the cylinders in the engine compartment. This is intake, the first stroke, and it occurs on the downstroke of the piston. It's followed by compression of the air/fuel mixture on the upstroke.

Next, the spark plug emits a spark, which causes the compressed fuel to combust, driving the piston back and causing the crankshaft to turn. This, in turn, rotates the axles that wheels are attached to, causing the car to move forward when you press the gas pedal. Finally, the piston forces remaining exhaust from the cylinders and out the exhaust pipe in the final upstroke of the cycle.

Is One Better Than the Other?

There are pros and cons associated with each type of engine. Traditionally, 2-stroke engines are prized for their ability to deliver a lot of power in very lightweight body, and they don't require some of the many components essential to a 4-stroke engine. In contrast, 4-stroke engines are larger and weigh at least 50% more than a comparable 2-stroke model.

A 2-strokes engine lacks the lubrication system found in a 4-stroke engine, however, meaning you must constantly add oil with your fuel to keep the engine from overheating (increasing costs). As such, you will see faster parts wear. Further, 2-stroke engines are also known for gobbling up fuel and creating a lot more pollution, which is why they haven't been used widely in cars for decades.

Where 2-Stroke Engines are Used Today

Where you're most likely to see 2-stroke engines is in items that rely on small engines, such as yard equipment like lawn mowers, weed whackers, and chainsaws. Some motorcycles and boats also use 2-stroke engines for their lightweight properties and the power they provide.

Although no longer used in modern automobiles, 2-stroke engines that deliver propulsion in just one upstroke and downstroke, as opposed to four, certainly have continuing value in the wide world of small engines.