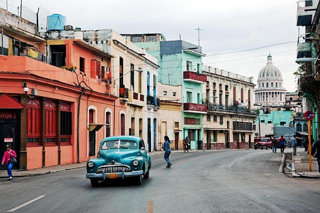 Cuba's car culture is different from anywhere in the world. If you know anything about their history, you know why. In brief, Fidel Castro came into power in Cuba in 1959, at a time when the U.S. was heavily invested in the island's economy, even the infrastructure. For this reason, many Cubans in this thriving economy were driving around in American automobiles of the era.

When Castro and his communist government moved in, however, they seized control of every aspect of the economy, including American-owned business interests. In response, the U.S. enacted a stringent embargo against the country that remains in place to this day, more than 60 years later. The results for the country have been staggering, and among the outcomes is a car culture virtually frozen in time.

Cars from a Different Era

Most of the cars on the island date back to the 1940s and '50s, right up until the point where the embargo took effect on February 8, 1962. At that point, new cars (along with American goods of all kinds) stopped entering the country entirely, although the supply had already largely dried up because of Cuba's own policies prohibiting new car purchases.

In Cuba, you'll see cars cruising down the street that are only found in junk yards or at vintage car shows stateside. Fords, Chevys, and Buicks from the '50s are daily drivers in Cuba, but the years haven't been kind. Many suffer from rust and oxidization. They sport a variety of poached and homemade fixes, from a patchwork of metal plugs and panels, to hand-fabricated replacement parts, to engines designed for other purposes (like powering welding machines).

That said, there are still plenty of beauties on display, with gleaming chrome, custom paint, and a high shine that speaks to the labor of love it takes to keep these decades-old cars from succumbing to the onward march of time. Most are maintained with a mix of ingenuity, non-authentic parts, and diesel engines swapped in to replace original engines as they inevitably fail.

One thing you cannot doubt is how much Cubans love their cars. Many have to go to extreme lengths just to keep them running, much less looking shiny and new. The government, now helmed by Fidel's brother, Raúl Castro, expressly forbids non-government-approved workshops, but this underground culture thrives because the need for parts and repairs is so high.

While the cars in Cuba continue to age, their parts slowly replaced by literally anything mechanics can get their hands on (including smuggled parts from across the globe), owners do their best to keep their beloved automobiles in operation. Despite the uphill battle to keep these lead sleds running, there's no denying the deep love affair Cubans maintain with their cars to this day, as evidenced by the lengths they will go to in order to keep them on the road.