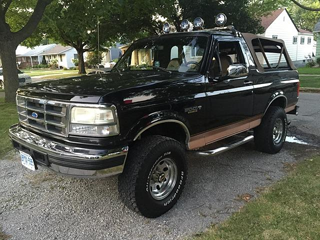 From the moment the Ford Bronco first became available in 1966 as a rival to the Jeep CJ, it captured the hearts and minds of drivers. Particularly popular was the station wagon model, with its early compact SUV features like 4WD, a spare interior (two buckets and a bench), and utilitarian accessory add-ons like a snowplow, a winch, a tow bar, and even a post hole digger. Also available were interior upgrades like a tachometer and a CB radio. From '66 to '77, the first-gen Ford Bronco set the bar for early off-road vehicles.

Even throughout the '80s and '90s, Broncos remained popular (following the lukewarm reception of the bulky second-generation Broncos, from 1978-79, which were quickly replaced with smaller, lighter models). In the late '80s and '90s, the Bronco brand enjoyed a much-needed reboot, thanks to the use of the F-series body style and upgrades like EFI and rear ABS.

Of course, it was the fifth-generation Broncos that would end up living in infamy, thanks to OJ Simpson's famous police chase seen 'round the world. In 1996, the Bronco line folded, but Ford maintains that it was because of the demand for 4-door SUVs, which led to the introduction of the Expedition.

More than two decades later, the Bronco is set to ride again. Ford announced at the 2017 Detroit Auto Show that it would resurrect the iconic brand (no surprise, with first-gen models fetching up to six figures these days). What can excited buyers expect and why is the time right to relaunch the quintessential compact SUV?

Incredibly, details about the new Bronco remain shrouded in mystery, although it is said the new model will be based on the Ranger platform, with a turbocharged 2.3-liter 4-cylinder base engine, and options for a V6 and a hybrid powertrain. Removable doors and a rear-mounted spare tire have been posited, and substantial off-road capabilities are assumed.

It's anyone's guess why Ford chose to relaunch the Bronco now, more than 20 years after halting production, but it could have something to do with a new batch of consumers that have wildly different expectations. Millennials and upcoming Gen-Z consumers are less interested in the ostentatious, oversized SUVs of the past two decades for several reasons.

These 20- and 30-somethings are having children later in life (because of mounting student debt and earnings quashed by the Great Recession). They also seek experiential purchases, as opposed to items of financial prestige—they need versatile, affordable automobiles that will take them on life's adventures.

Of course, high gas prices also play a role, and with car companies looking to reduce emissions, dumping V8 engines is a given. Plus, the younger generation is more concerned with the state of the environment than older car buyers.

It's a perfect storm of economic and ecological conditions that makes the time ripe for a smaller SUV that appeals to the limited pocketbooks of the younger generation, as well as the desire to embrace retro styles. From the 1960s to today, the Bronco has long served as a pinnacle of rugged individualism. As early as the end of 2020, we could see its triumphant return.